This tutorial explains how to cut atomic planes.

1. Create a supercell with the desired orientation

As an example, let us use a supercell of diamond with a specific orientation, as explained in a previous tutorial:

The visualization with Atomeye should yield something like this: 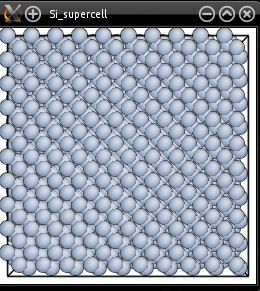 2. Cut a plane along a Cartesian axis

Now if you visualize the new system inside Atomeye, you will see that it has been cut, i.e. all atoms that have a X coordinate larger than 30 Å were removed: 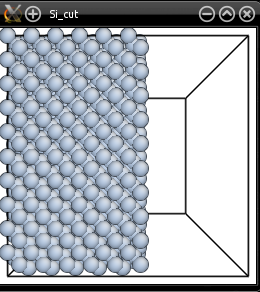 Note that 30 Å is the distance between the origin of the box (0,0,0) and the plane that is used to cut the system.

You may also remove atoms that are above, or below, a given plane along the Y or Z Cartesian axes.

3. Cut a plane along a crystal direction

The option "-cut" also accepts crystal directions expressed with their Miller indices. For instance, if you wish to remove all atoms located above 40 Å along the [111] direction, use:

Visualization in Atomeye shows that the system was indeed cut above the given plane: 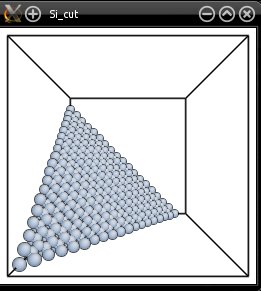 You may try to cut the system along other crystallographic directions.

4. Cut only a selection

As many other options, if the option "-cut" is used after the option "-select", then it applies only to the selected atoms.

This command tells Atomsk to select atoms that are within 5 Å of the edge of the box along the Y axis, and to cut atoms that have a X coordinate greater than 30 Å. The latter option applies only to atoms that were selected, hence it will result in a step at the surface: 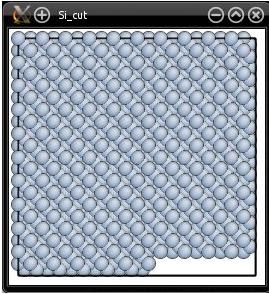