This tutorial explains how to interpolate atom positions between two configurations.

In this tutorial we will use the example of the migration of a vacancy in aluminium.

1. Prepare the initial and final configurations

Assuming that you do not already have the initial and final configurations, we will begin by preparing them.

Let us begin with the initial configuration. It will just be a crystal of fcc aluminium containing a vacancy. We use the mode "--create" to generate the unit cell, then duplicate it, and finally remove an atom to introduce a vacancy:

This initial configuration can be visualized in Atomeye or OVITO. Below atoms are coloured according to their coordination, so atoms around the vacancy appear in red: 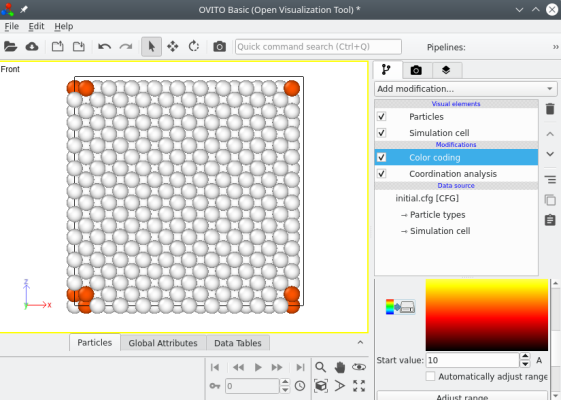 And thus we constructed the initial and final configurations, where the vacancy is in two neighboring positions.

2. Interpolate between the two configurations

Atomsk will generate 7 new files, named from "initial_img1.cfg" up to "initial_img7.cfg". You may change the number of intermediate configurations at will. Note that Atomsk performs a linear interpolation of atom positions, meaning that all intermediate positions of an atom are along the segment joining its initial and final positions, and all are equidistant to one another.

Opening the first configuration ("initial_img1.cfg") with OVITO will cause it to open the sequence of files. You may then play with the slider to navigate between configurations, or generate an animation like the one below.

Interpolation can be performed between any type of configurations: vacancy or interstitial atom moving, dislocation in two consecutive Peierls valleys, etc. It can be useful to generate intermediate configurations in preparation of a chain-of-state calculation such as the nudged elastic band (NEB) method, or simply to smooth the visualization of a defect moving around in the lattice.